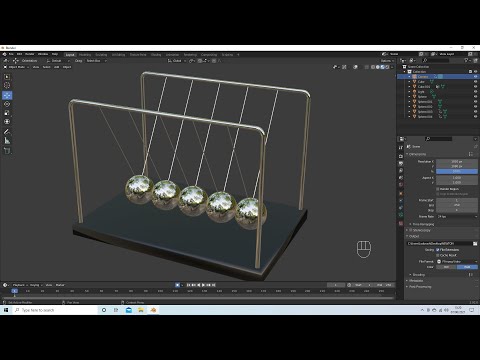 Blender 2.92 Tutorial: How To Make And Animate A Simple 3d Newton’s Cradle.

How to create an animated 3d Newton’s cradle.

The Newton’s cradle is a device that demonstrates the conservation of momentum and the conservation of energy with swinging spheres. When one sphere at the end is lifted and released, it strikes the stationary spheres, transmitting a force through the stationary spheres that pushes the last sphere upward. The last sphere swings back and strikes the nearly stationary spheres, repeating the effect in the opposite direction. The device is named after 17th-century English scientist Sir Isaac Newton. It is also known as Newton’s pendulum, Newton’s balls, Newton’s rocker or executive ball clicker (since the device makes a click each time the balls collide, which they do repeatedly in a steady rhythm).

A typical Newton’s cradle consists of identical metal balls suspended in a metal frame so that they are just touching each other at rest.