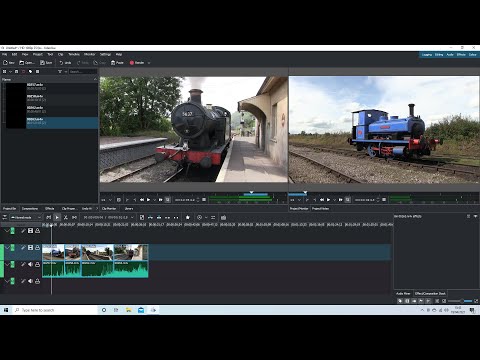 Kdenlive For Windows: Install And Quick And Easy Video Editing.

How to run Kdenlive on a Windows 10 PC and edit a sequence of video clips.

Kdenlive makes use of MLT, Frei0r effects, SoX and LADSPA libraries. Kdenlive supports all of the formats supported by FFmpeg or libav (such as QuickTime, AVI, WMV, MPEG, and Flash Video, among others), and also supports 4:3 and 16:9 aspect ratios for both PAL, NTSC and various HD standards, including HDV and AVCHD. Video can also be exported to DV devices, or written to a DVD with chapters and a simple menu. Kdenlive has multi-track editing with a timeline and supports an unlimited number of video and audio tracks. Tools to create, move, crop and delete video clips, audio clips, text clips and image clips. Configurable keyboard shortcuts and interface layouts. A wide range of effects and transitions. Audio effects include normalization, phase and pitch shifting, limiting, volume adjustment, reverb and equalization filters as well as others. Video effects include options for masking, blue-screen, distortions, rotations, colour tools, blurring, obscuring and others. Ability to add custom effects and transitions. Rendering is done using a separate non-blocking process so it can be stopped, paused and restarted. Kdenlive also provides a script called the Kdenlive Builder Wizard (KBW) that compiles the latest developer version of the software and its main dependencies from source, to allow users to try to test new features and report problems on the bug tracker. Video editing is the manipulation and arrangement of video shots. Video editing is used to structure and present all video information, including films and television shows, video advertisements and video essays. Video editing has been dramatically democratized in recent years by editing software available for personal computers. Editing video can be difficult and tedious, so several technologies have been produced to aid people in this task. Pen based video editing software was developed in order to give people a more intuitive and fast way to edit video. Though once the province of expensive machines called video editors, video editing software is now available for personal computers and workstations. Video editing includes cutting segments (trimming), re-sequencing clips, and adding transitions and other Special Effects. • Linear video editing uses video tape and is edited in a very linear way. Several video clips from different tapes are recorded to one single tape in the order that they will appear. • Non-linear editing systems (NLE) allow video to be edited on computers with specialized software. This process is not destructive to the raw video footage and is done by using programs such as DaVinci Resolve, Avid Media Composer, Adobe Premiere Pro and Final Cut Pro. • Offline editing is the process by which raw footage is copied from an original source, without affecting the original film stock or video tape. Once the editing is complete, the original media is then re-assembled in the online editing stage. • Online editing is the process of reassembling the edit to full resolution video after an offline edit has been performed. It is done in the final stage of a video production. • Vision mixing is used when working within live television and video production environments. A vision mixer is used to cut live feed coming from several cameras in real time. Like some other technologies, the cost of video editing has declined over time. The original 2″ Quadruplex system cost so much that many television production facilities could only afford a single unit, and editing was a highly involved process that required special training. In contrast to this, nearly any home computer sold since the year 2000 has the speed and storage capacity to digitize and edit standard-definition television (SDTV). The two major retail operating systems include basic video editing software – Apple’s iMovie and Microsoft’s Windows Movie Maker. Additional options exist, usually as more advanced commercial products. As well as these commercial products, there are opensource video-editing programs. Automatic video editing products have also emerged, opening up video editing to a broader audience of amateurs and reducing the time it takes to edit videos. Video editing can be used for many purposes such as education, entertainment, and documentation.[ • Virtual reality—Advancements are being made to help with editing spherical video used in virtual reality settings. The ability to edit in virtual reality was created so that users would be able to check their video edits in real time, without having to continually view the video in a headset between edits. • Social media—Video editing can be used for entertainment and other purposes on YouTube and other social media sites.